The longevity of Wild Card picks

On Thursday, DeAndre Brackensick, Erika Van Pelt, and Jeremy Rosado were chosen as Wild Card picks after performing for the judges. It’s a fair question to ask how these chosen contestants, in the light of historical evidence, are likely to be able to do in the finals.

Out of 10 previous seasons, half have had a Wild Card round, where the judges choose members of the semifinalists who were not selected by the voting audience to advance to the finals (seasons 1, 2, 3, 8, and 10). Seasons 4-7 and 9 did not include such a round, since those semifinals spanned several weeks, giving the audience plenty of time to warm up to the contestants.

The average Wild Card sang in 5.5 episodes, compared with 6.4 episodes for those who were voted into the finals by the audience. The first five entries are all women, all of whom were eliminated within the first 4 weeks.

However, not all Wild Cards are made equal. In the above table I have also included approval rating as sampled by WNTS. If we look at how many votes the contestants survived as a function of their performance approval, we see that better contestants do indeed (on average) make it farther: 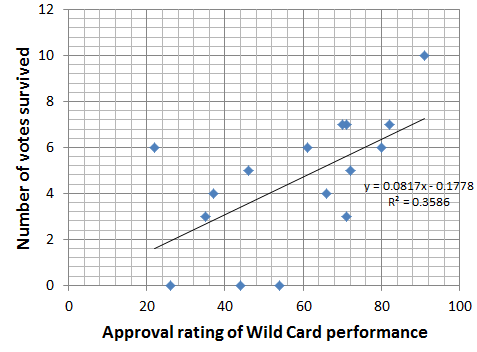 Though the fit is not excellent, it’s clear that there is a positive dependence on quality, explaining roughly 35% of the trend. Of course, some people are rejected by the voting audience in the finals because that audience already rejected them during the semi-finals. But clearly some of the contestants are able to redeem themselves. This is especially true of Clay Aiken, runner up in season 2, George Huff, and Trenyce. (I don’t include Matt Giraud, since he also had to be saved by the judges.) A better fit can be obtained if one looks at the Wild Card picks average approval rating for all the rounds they participated in: 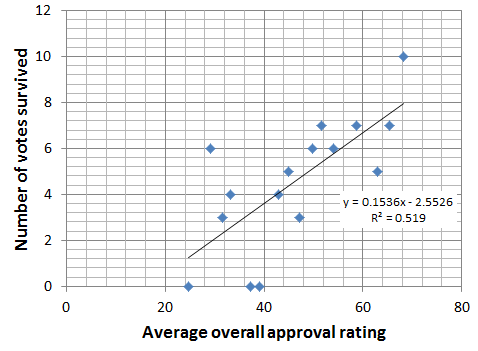 The fit here is quite decent.

So, we come now to the obvious question: How well are those chosen on Thursday likely to do, based on this (admittedly crude) model?

The contestant with the best shot is Erika Van Pelt, whose performance of The Edge of Glory ranked quite highly on the approval ratings. Erika is one to watch, in my opinion. With the fourth highest ranked Wild Card performance, she could be a serious contender this year.