Home » Historical Analysis » A brief history of the Bottom 3

A brief history of the Bottom 3

Although I’m not quite sure whether it’s possible to make predictive use of it, it’s well past time that I spent some time thinking about the information that we’re given by knowing the bottom 3, rather than only knowing the lowest vote-getter.

Who ends up occupying those Bottom 3 (or Bottom 2 in the later rounds) seats? Of the 229 who have (this includes repeats), 53% were female. This is partly to do with the fact that the women are eliminated faster, and hence are not available further down the line to sit in them. There have been 142 instances of someone being in the Bottom 3 who had already been in the bottom group before. (58% of those were women.) Out of 102 eliminations, more than two thirds (72) were presaged by a trip to the Bottom 3, about equally divided between men and women.

If anything, I’m a bit surprised at how low this is. Nobody should have been surprised by Erika Van Pelt’s elimination last week, as she was a Wild Card, in the Bottom 3 girls in the Top 13, and then in the Bottom 3 again last week. You’d have to be blind to not see that coming … and of course my numerical model was blind to it!

As with any such trends, we can point to some notable counter-examples. Justin Guarini hit the Bottom 3 in the Top 7 of Season 1, and went on to finish 2nd. Nikki McKibbin, the same year, was in the Bottom 3 on the very first round, but ended up finishing 3rd, a remarkable run. Clay Aiken never occupied the Bottom 3, but Ruben Studdard did (in the Top 5). And so on.

Let’s check out the graph. Here is an overview, which shows how many people went a given number of rounds after landing in the bottom 3/2: 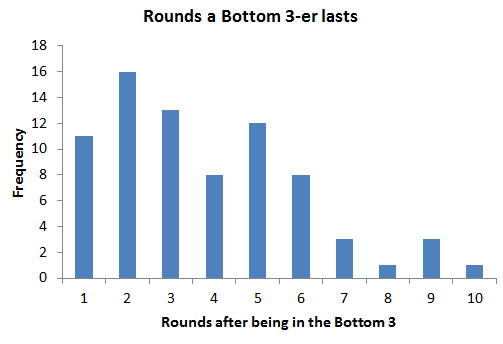 This graph should be read this way: The lower axis indicates the number of rounds, after the first instance of being in the Bottom 3, that the person made it. The bar height shows how many people went this long. So, looking at the left-most bar, we see that 11 people were eliminated in the very first round after their appearance in the B3 (Andrew Garcia, Corey Clark, George Huff, Karen Rodriguez, Michael Sarver, Mikalah Gordon, Paige Miles, RJ Helton, Ryan Starr, Shannon Magrane, and Thia Megia. Corey Clark was technically disqualified.) 16 made it two rounds, which includes Erika Van Pelt.

Actually, only 5 contestants stumbled out of the gate to make the Bottom 3, and then lasted quite a long time. Katharine McPhee went 8 rounds after her trip to come in 2nd in Season 5. Diana DeGarmo and Kimberley Locke both went 9 rounds in Season 3 after landing in the B3. Syesha Mercado was a real die hard, going 9 rounds after first appearing in the bottom 3 to finish 3rd against the Davids in Season 8.

Finally, the ultimate survivor: Haley Reinhart first landed in the Bottom 3 in the second round (Top 12) of last season. She went on 10 more rounds, until she finally fell to the country juggernaut of Scotty McCreery and Lauren Alaina.

These exceptions notwithstanding, after in the Bottom 3, your days are numbered. Here are the cumulative percentages of those removed from the contest after hitting the Bottom 3:

As you can see, half of those in the Bottom 3 are gone by the third round after they landed there, and 90% after 6 rounds.

So, if you think Joshua Ledet, Deandre Brackensick, or Elise Testone are going to keep on keeping on, well, I wouldn’t put money on it. They’ve all been in the B3, and their prospects are not good at all, historically speaking.