The curious case of Elise Testone 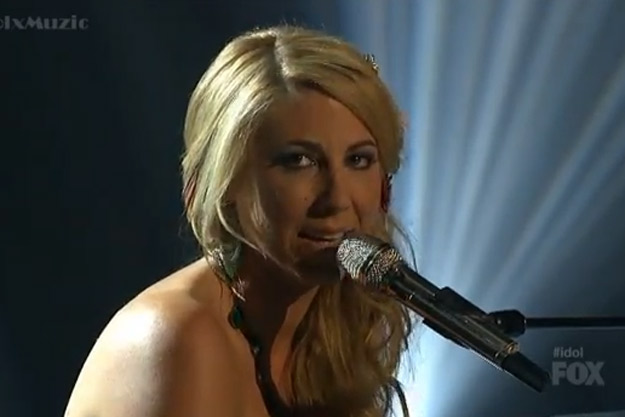 Have we ever seen a contestant quite like Elise Testone?

I don’t think so. Jimmy Iovine, who is actually quite good at handicapping the field (why is he not a judge?), stated that Elise is judged week-to-week, which is another way of saying that she has no real reliable fan base. If she has a good week, she’s safe, if she has a bad week, she’s in the bottom 3. Here is a summary of her performances thus far:

In terms of raw number, counting all rounds in the 11 year history, only one contestant has more appearances: Syesha Mercado, season 8’s second runner up. Let’s take a look at Syesha:

As you can see, by this stage Syesha had been in the bottom 3 only four times (five if we count the Top 6 as being equivalent to the save round). But that’s not the only thing I want to point out. Syesha’s performance quality (measured by WNTS approval rating) is actually quite consistent. She never registered anything above a 78 in the Top 6, for which she was again in the bottom 3. That’s interesting, because it showed a lack of ability to attract single-time voters: people who weren’t fans, but liked it that one day.

Elise, on the other hand, does appear to be able to attract voters if she has a good night. And she also is far, far more inconsistent than Syesha. She has had some huge week-to-week stumbles, such as following up her highly rated performance of Adele’s One and Only with a fairly terrible I’m Your Baby Tonight on Whitney Houston week, and following up one of the highest rated performances ever, Led Zeppelin’s Whole Lotta Love with the ghastly I Want to Know What Love Is, Foreigner’s all-out assault on good taste. Syesha has nothing like that to speak of.

So, yes, Elise is singular. While I certainly wouldn’t put any money down on her to stay this week, neither would I put any on the other side. The thing about being one-of-a-kind is that we don’t have any basis for expectation. Elise might, in fact, perform decently, and I wouldn’t even be too reluctant to say that she could end up a close second to WGWG #5 Phil Phillips. Remember now that all contestants but Phil have been in the bottom 3.

As I’ve noted before, there is a sort of threshold that the finale contestants has to meet to win the season.

Ignoring the execrable Scotty McCreery, if we say the threshold is Taylor Hicks’ highest value (82), then Elise, Joshua, Jessica, and Hollie have all met that.

Now, yes, of course it’s not a good sign for Elise to be in the bottom 3 so many times more than Skylar. But I might be a bit careful in a guess that “she’s obviously gone” this week. I think that really depends on how she performs.