Look, I’m not going to grouse in this space that America “got it wrong” by keeping Phil and dumping Skylar. America has been getting it wrong for a long time. Yes, it’s capricious and injudicious. That’s boring and obvious.

I’m here to talk about how odd it is that the singer rated #1 on Dialidol, not to mention the only country singer still on the show, was eliminated.

How many times has the top rated Dialidol contestant been eliminated? Excluding semi-finals, the answer is that it’s only happened twice before in Dialidol’s 7 years of existence (while Idol itself has been on for 11 seasons, Dialidol only started up in season 4). Melinda Doolittle in season 6 and Lil Rounds from season 8 are the only contestants to hold such a distinction, at least until Skylar. Like I’ve said before, Dialidol is pretty damn good. 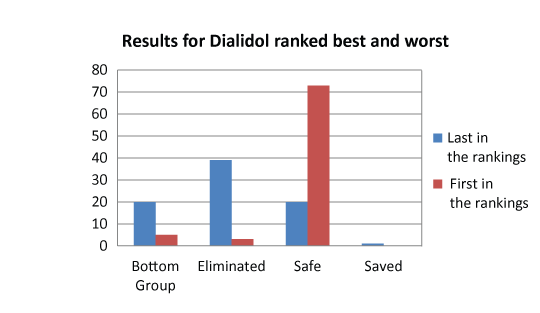 Occurences of results for the top and bottom rated Dialidol contestants.

The figure above shows what happened to the person ranked #1 and ranked last on Dialidol. Here is a breakdown of the numbers by percentage

What possible things could be wrong with Dialidol that makes these occurrences ever happen?

I would note that in each of the 3 cases of eliminations, the contestant in question was a woman, which is probably indicative of a small sampling problem with Dialidol’s user base (not that I think they could control it; you have to accept some error in any system). Of those whom Dialidol had ranked #1, five found themselves in the Bottom 3/2 but not eliminated. Three of those five were women (actually, 2 of them were Hollie!), while two were men. On the other side of things, there are the people who are ranked lowest on Dialidol but are safe (not in the Bottom 3/2): this happened 20 times, and only six of those were women. So, yes, Dialidol voters favor females more than the general voting public does.

It certainly was upsetting to a large group of people last year (myself included) that the country musicians seemed to sail through at the expense of better performers. The finale consisting of Scotty McCreery and Lauren Alaina was widely derided and comparatively scarcely watched. The idea was that midwest and southern states voted as a bloc to keep those two in.

I shall have to put together a more detailed argument at a future point, but I’m beginning to believe that that effect is probably overrated. There’s just as much reason to believe that Scotty won because he was a white guy with a guitar, just like the three winners before him, as to believe that he won because of country. Imagine that a large group of voters splits its votes between Lauren and Scotty, while all other votes go to the non-country people. By the end of the contest, you have to reckon that many of those votes would consolidate in a single non-country singer. After all, do you know many people who like country and other stuff? But this didn’t happen.

And this year makes the case against the theory of the “bumpkin bump” even more starkly. Chase Likens, whom I had resigned myself to having to hear for the next 12 weeks during the semifinals, was eliminated immediately, and Skylar at one point switched from country to more pop songs after she found herself in the Bottom 3. There doesn’t seem to be much evidence this year of any country advantage, and other than a few high profile cases like Carrie Underwood I can’t think of too many times where it clearly came into play in the past either.

I would hardly characterize Skylar’s exit as “shocking”. Her songs were mainly so-so, and her personality on the show hasn’t been what one would call dazzling. But it certainly was strange.