It was apparently news today that White Guy With Guitar (WGWG) winner #2, Kris Allen of season 8, thinks that another WGWG will win this year. He’s referring to Phil Phillips, who would indeed by the fifth such winner in 5 years. I happen to agree with Kris Allen that Phil will probably win. That is not an endorsement, just a thing I think is true.

You know what else is true? It isn’t just American Idol voters: Americans in general like WGWGs. 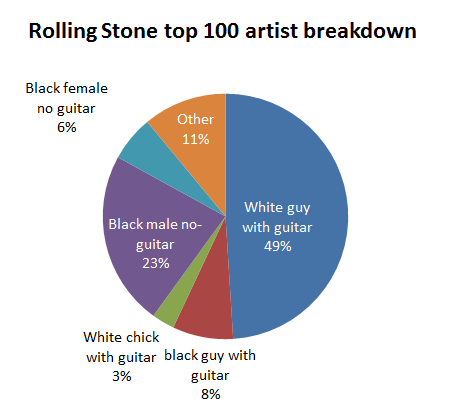 Maybe you think Rolling Stone isn’t indicative of American Idol (I disagree, since the judges and producers are of that ilk). Fine, then look at the Billboard charts. As I pointed out previously, about 65% of the Top 10 at any point are men. If we expand to the Top 100, the problem gets far more lopsided in favor of men. It’s not pretty, but it appears to be true.