Home » Season 11 » Jessica may be closing the gap

Jessica may be closing the gap

UPDATE 2: Ok, I am going to bed. This is ridiculous. According to my projection, Jessica will overtake Phil in about an hour, 4:30 AM eastern. If that happens, well, you’re going to see a post here tomorrow morning that says I think Jessica Sanchez will win.

UPDATE: The effect is accelerating for Jessica Sanchez. To look at this, it appears that she will overtake Phil Phillips before the voting closes. Wow. I’ve updated the graph from my original post to reflect the change. 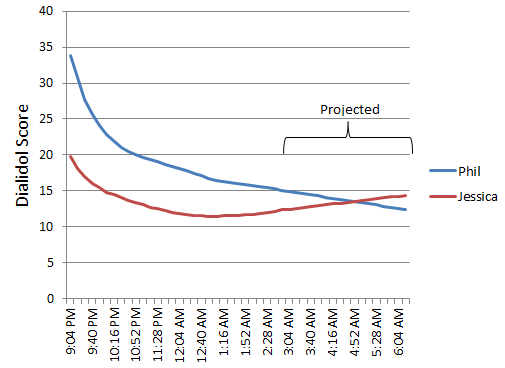 (Times are all eastern time zone, times beyond 2:30 AM are projected by me) If Jessica can maintain the pace (that is a big if), her supporters can barely squeak her into the lead by the time Hawaii’s voting closes, I think. Now, if a majority of those votes come from California, it won’t happen, because their voting will close off. But if more from Hawaii replace them, they might be able to squeak by.