Too close to call

Jessica Sanchez’s fans failed to pull her ahead in Dialidol, as her support petered out at about 3:30 AM eastern time last night: 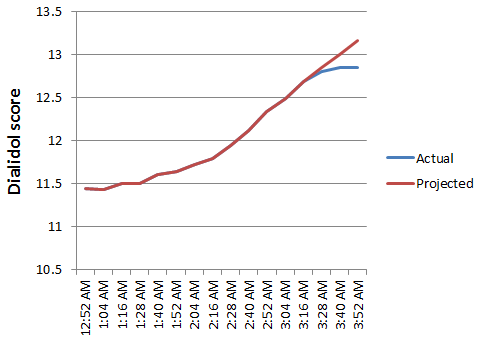 They did, however, pull her much closer to even with Phil than at the beginning of the night. As such, there is no official Dialidol call, because the difference between the two is within the margin of error. Also note that I believe (not sure) that Dialidol should have left the poll open for another hour. However, at the rate measured at 4:00 AM, that would not have changed the fact that Phil would be on top.

Some people think that Phil being ahead on Dialidol is dispositive, but I’m not so sure. We saw just last week that Jessica’s votes were at least slightly undercounted compared with Joshua’s. The question is how big this effect is. We know that she’s being undercounted by at least 0.3 points. But could she be undercounted by 1.4? We don’t really know, but it could be.

Much has been made of Dialidol’s accuracy, but many of their calls are outside the margin of error. 2 out of 7 were too close to call. Yes, Dialidol ranked the winner #1 in both of those cases, but they had a 1 in 4 chance of that happening by random guess.

Meanwhile, Intrade’s estimate for Phil winning dropped from 90% to 80%, which is where I thought it ought to be. Also, you can read Votefair’s official explanation for why it’s OK that Jessica has led every poll for the year. I’m not sure I find it entirely convincing. He says that he is controlling for votes from the Philippines. But what about votes from Asian Americans? It’s not like he can IP filter those. Votefair is a self-selecting poll, and there are lots of potential problems with that.

I still lean toward Phil being the winner, but there isn’t enough information right now.