The format of Idol this year is different from previous years in that next week we will have a show that gives approximately equal time to each contestant, even though no voting will happen. Thus, it is I think appropriate to summarize, now, the pre-exposure for each contestant in the auditions and Hollywood rounds.

As in previous years, I’m acting more like a boxing judge than a baseball ref. I include any segment where the person’s name is given and that lasts more than 10 seconds. When the clips are interwoven, such as in group week, I make a judgement call as to whether the segment focuses enough on the contestant to count. Thus, your score may vary from mine, but it shouldn’t vary much.

Grouped by sex, male and female semi-finalists ended up with basically equal time throughout the auditions and Hollywood rounds (I count a total 5511 seconds for women and 5525 seconds for men). This was not the case after the audition rounds, but the Hollywood round made up the deficit by focusing on women who made it through (whereas we tracked many men in Hollywood who were cut). 12 women out of 20 had their initial audition shown, but 2 were marginal, as opposed to 10 men, so again they were essentially tied.

Overall, my initial complaints aside, the producers did a good job evening out the exposure among women and men.

As I’ve noted in this space before, lots of pre-exposure generally speaking is predictive of success in the voting. Here are the standings for total screen time, broken down by individual. First for women: 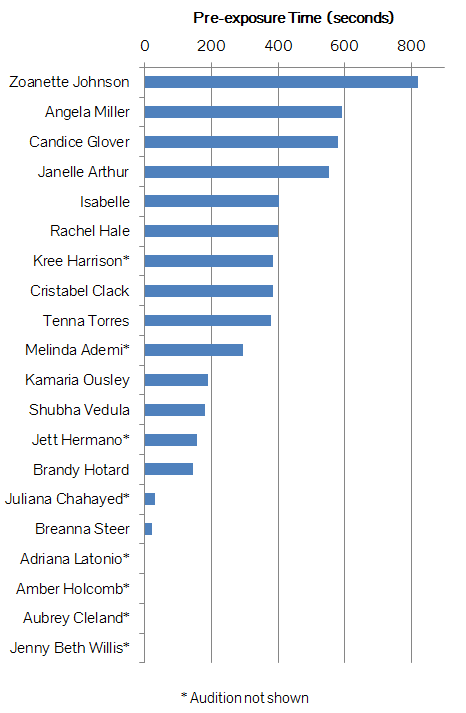 We spent a lot of time with the peculiar Zoanette Johnson, and a fair amount with Angela Miller, Candice Glover, and Janelle Arthur. Isabelle (known also as Christina Pasqualone or Isabel Pasqualone) and Rachel Hale got a decent amount.  4 women were not featured whatsoever, which is not a good sign for them, though as Hollie Cavanagh proved, this is not fatal. 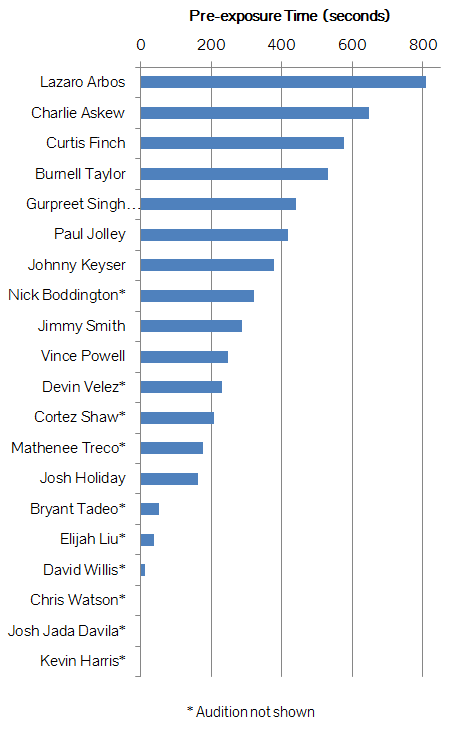 Stutterer Lazaro Arbos got a large (though not historically huge) amount of time, roughly as much as Zoanette. We also saw quite a lot of alleged introvert Charlie Askew. Three men have not been featured at all. (Note that contestants like Johnny Keyser and Nick Boddington, who appeared in prior seasons, are not credited with time from those prior seasons.)

My initial problems with the distribution of screen time have been somewhat obviated, and I’m actually fairly impressed with how much fairer the producers have been this year compared to previous years. There are certainly no contestants being as obviously pimped as Phil Phillips and Heejun Han. While obviously some people have been shafted by the process, it’s not nearly as egregious as in prior years.

I note, as an aside, that this parallels my impression of this year’s judges panel. While initially I thought them more of the same, I’ve grown to like the dynamic much more than seasons 10 and 11. Nikki, if she stays the course, can provide some of the volatile and critical panache that Simon did, something sorely needed. Perhaps I’ve contracted Stockholm Syndrome.

I’m not really sure I “get” the idea behind the fully-televised-but-no-voting semifinal that is happening next week(s?). The Idol Analytics semi-final model assigns an increased probability of advancing to contestants who are featured in the audition and Hollywood rounds. With a round where they are all given equal time before the actual voting happens, it’s not clear whether this effect is still relevant (the answer to this is a bit technical but the bottom line is there’s really no way of knowing). Assuming that there is still a round of semi-finals that does include voting, it may be that this overestimates the effect of pre-exposure.