On first set of quarterfinalists, judges split from audience

This season has given us the first glimpse into the judges’ decision making during non-voting rounds. The producers chose to have the quarterfinals (consisting of 40 people) be a fully televised round, but with the judges making up their mind to form the Top 20.

Obviously, Dialidol is not in effect, and Votefair has not yet begun to collect statistics. But WhatNotToSing did, and it shows that while the judges largely called the women according to their rank among bloggers, the men were chosen contrary to the audience’s perception.

I thought it odd, myself, that Isabelle was eliminated, while Tenna Torres advanced. I can only think that this was based on prior performances. Other than that, the ranking of the audience was exactly the same as the judges. I would note that Amber Holcolm might need something of an asterisk, because My Funny Valentine is nearly always judged a high score—audiences just seem to like that song.

These scores are pretty out of whack with the judgement of the audience. As they had it, Johnny Keyser and JDA should have advanced, far in front of Charlie Askew and Elijah Liu, who had results that were way below average.

The average for women overall was 46.5 vs 40.4 for men, a modest amount. However, among men who advanced the average was only 48.6, versus 61.6 for the women. In principle, the women should have a sizable advantage (of course, “should” doesn’t always mean anything).

I thought that there were a lot of unfamiliar songs on the first couple shows, but actually the number of new songs for a first performance has been pretty low so far, historically speaking: 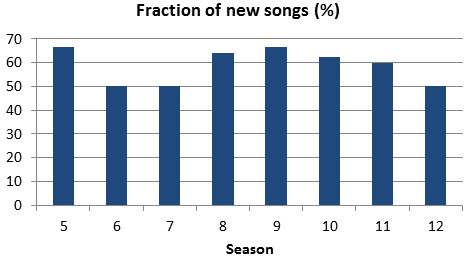 This post was updated to correct a misspelling of Jenny Beth Willis’ name.