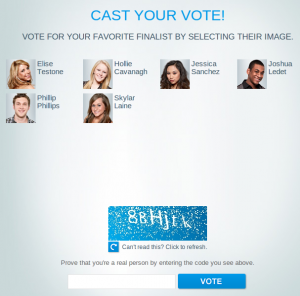 Today it was announced that Idol would get a new voting feature, called the “supervote”. As I understand it, rather than voting 50 separate times on Facebook or American Idol’s website, you can cast 50 votes all at once, dividing them among your favorites in any way you want.

I think it’s pretty clear that this is going to weight the voting more in the direction of online voting. Rather than having to sit and press vote and fill in a CAPTCHA each time, the work to cast 50 votes (which was the maximum allowed last year online) has just been made tiny by comparison. People who were likely only to cast 10 votes will almost certainly cast the entire 50 now. This makes phone or text voting much less appealing.

However, I’m not sure that this makes much of a difference. In an age where Twitter hashtags appear on television screens ubiquitously and 150 million Americans use Facebook, surely a lot of voting was going on by web. With a sample size that big, it’s hard to imagine that such a rule change would significantly change the demographics by much, and hence affect the voting trends.

That being said, I am concerned that it could drastically throw off the accuracy of Dialidol. Dialidol’s service works by measuring how many busy signals are on the line when voting, and using an empirical method to predict the result. Even if the number of phone votes stays the same, the number of online votes is apt to rise by a factor of between 5 and 10, since who would vote 10 times if one could vote 50 times just as or more easily? Dialidol appeared to weather the shift of many voters to text messages, maintaining fairly good accuracy, but 50 votes with a couple clicks is a huge number.

From an electoral perspective, it’s interesting to find out what effect the supervote policy has on vote splitting. It’s well known that with three candidates, two of which are similar, votes will be split between the two similar candidates leading to election of the more heterogeneous candidate. The most obvious example was the election of Bill Clinton, who benefited greatly by Ross Perot taking away part of George H. W. Bush’s votes. That was an election with 1 voter, 1 vote. In American Idol, depending on how onerous the requirements are for voting, there may be a de facto barrier similar to the legal barrier that American elections have. That is, if it’s possible, but annoying, to cast many votes, then some people won’t cast them, and vote splitting is important. However, with a low barrier to multiple voting, vote splitting could become less important.

On the flip side, if everyone votes the full 50 times for their favorite person, this rule may just lead to vote inflation, with no overall changes to the general milieu. This is an empirical question, not one that someone can divine the answer to.