How bad are Idol’s ratings?

Is American Idol losing its cultural cachet? The signs around seem to point to yes. What was once something that commanded national news, its own wrap up show, and even a weekly write-up on internet juggernaut Slate, now has none of those things. One scarcely has to try to avoid spoilers, and other shows like The Voice have moved in to compete in a serious way. Recently, Idol stopped winning the night for performances, and its results show is regularly killed by The Big Bang Theory. The ratings are even lower than season 1, which aired during the summer months when less TV is typically watched.

The Nielsen ratings for a show are kind of a murky issue. They measure a percentage of all TV viewers watching a show, out of the 100 million or so total TV viewers. The one most people pay attention to is the ages 18-49 demographic, the most important for advertisers. However, the share of viewers watching broadcast (rather than cable) shows has been falling for many years now. In 1984 fully 45% of all viewers were watching major prime time broadcast networks, as opposed to cable, local, or public broadcasting. By 2002 when Idol premiered it had already fallen to 29.6% and was 25.6% in 2009 (the most recent year published by TVByTheNumbers).

If we look at the ratings for Idol season by season, plotted with the x-axis representing the number of remaining contestants in the finals, we can see how things have progressed 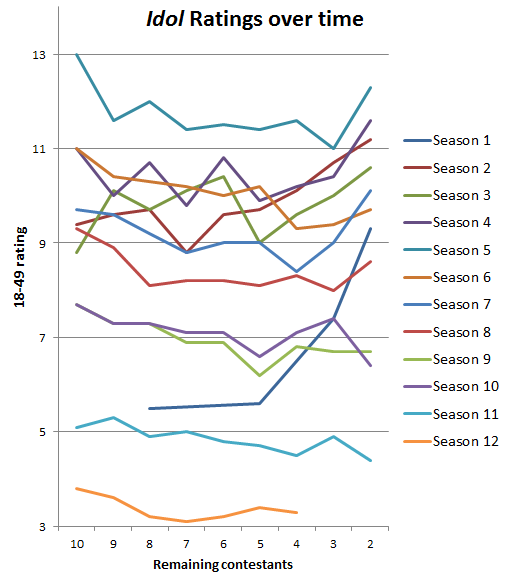 In Season 1 the viewers caught on around the Top 5, and Idol jumped a huge amount (points are omitted where data was unavailable). Season 5, with Taylor Hicks and Katharine McPhee, was clearly the biggest year by any account. That’s a bit strange to me, since I always thought Season 7 (David Cook) was really the zenith in terms of cultural awareness of the show.

Season 12 is the lowest rated season by a comfortable margin. But how bad is it when you consider the falling overall audience? To answer this, we could weight the ratings data proportional to the remaining audience. The data is provided by TVByTheNumbers in the above link only through 2009, so we have to do a bit of guesswork. We can fairly reliably think that the overall audience is falling about 1 point per year, which has been the case since 2000 (with the exception of 2005, which had a rise probably due to DVR ratings being added).

Viewed through this lens, Season 12 is … still pretty bad 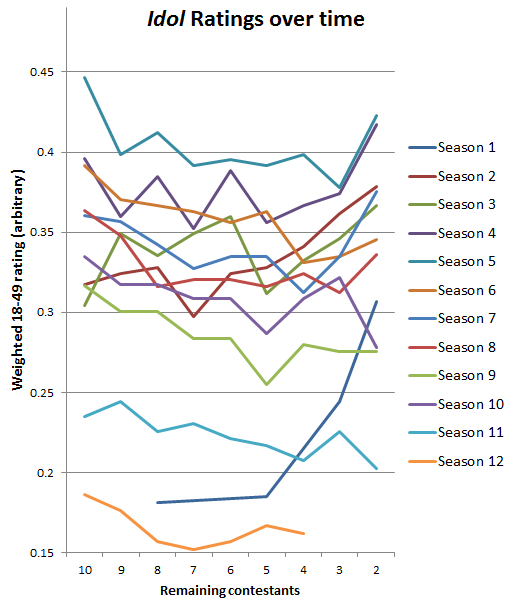 Season 12 at least starts a little better than Season 1, but after that plummets to last place. Seasons 4 and 5 look pretty similar near the end, accounting for audience size. Season 8 gets a boost relative to Season 1. Season 10 was a bit of an outlier, an unusually strong year that got big viewership relative to that year’s total (absent the horrible finale that year). Other than that, the rankings don’t change much. The viewership, even as a share of remaining broadcast viewers, is falling pretty fast.

One caveat here is that this year’s broadcast ratings appear to have fallen further than previous years, with Fox alone being about 19% lower than last year. Could that account for the low ratings? No, even if you include another point of loss, Season 12 is still the nadir. Idol is sinking fast, and the producers have reason to worry.