The methodology for the finals model is described here. The model is 87% accurate on ranking within a margin of error of +/- 3%. Probabilities being what they are, somebody with a not-safe probability of just 0.25 will be in the bottom 3 one out of four times. Please do not comment that the numbers are wrong. They are probabilities, not certainties or even claims. Do not gamble based on these numbers.

Alex Preston and Jessica Meuse both received excellent marks for their original songs tonight. C.J. Harris had the lowest reviews for his song, Soulshine, which was already performed by Ben Briley this season. With low popularity, a prior trip to the bottom 3, and having been a wildcard to begin with, C.J.’s chances are grim.

Sam Woolf also got rather poor reviews for his song, Lego House, but remains popular. As the day goes on, this indicator has swung wildly for him, so watch this space as the numbers for him are likely to change. 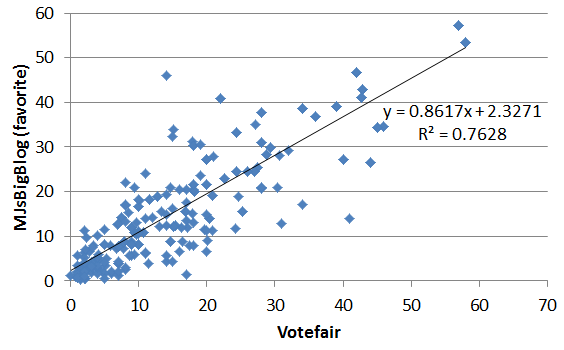 As you can see, these two are reasonably correlated. The two largest outliers are 1. a gross underestimate of Phil Phillips’ popularity and 2. a gross overestimate of the popularity of Jessica Sanchez by Votefair relative to MJs poll. But it’s quite uncorrelated with Dialidol, having R2 of only 0.276. This indicates that it’s a good substitute for Votefair, should that service stop existing, but as a substitute for Dialidol it simply won’t do.

Dialidol presented a different piece of information, information about vote-getting, which is quite a different thing than being popular or being a good singer. A random poll of tweets tonight showed that C.J. and Malaya had the least number of people tweeting that they had voted for them, but it’s anybody’s guess as to whether this has any predictive power. People on Twitter are a subset of the voting public, and there’s no a priori reason to assume that that subset is representative of the entire set.