Names in green are most likely to be safe. Names in red are considered most at risk for being eliminated. Names in yellow are undecided. The most probable elimination is Jessica. However, anybody being eliminated would not be shocking.

The collective judgement of the internet is that Jessica is going home tomorrow night. This position certainly makes sense. None of the other contestants was ever in the bottom group except Jena, and that was way back in the Top 12. Jessica found herself in the bottom group in both the Top 6 and the Top 7, and we know for a fact that she was in 5th place in the Top 6. Her being safe would be surprising, though not quite at the level of what I would call shocking.

Jessica is also behind in the Top 3 tracker, and has been behind the three remaining contestants consistently. I would caution, though, that the gap between her and Alex was slimmer than it appears.

I must admit, I’m seeing a bit of a turn-around on Caleb in the numbers. Is he starting to wear thin? Weigh in on the poll.

In the past I’ve investigated what is the best bellwether of elimination when multiple songs are sung. It could be that the best performance is the most predictive, or it could be the average. WNTS ratings become so weakly linked with elimination late in the game, at the point where multiple songs are sung, that the effect is hard to suss out. So I have just stuck with the average, since it’s the most obvious metric.

My point is, if Jena had two middling performance, but one barn burner, where should that leave her? I think it’s splitting hairs, but from reading other impressions on the web, I’m inclined to think many people get an average impression for the whole night, and hence the mean WNTS score should hold sway. I don’t personally think that way, but it does seem to be the norm. Either way, she tops the all indices by a comfortable margin.

Below are the updated model performance stats. With only a few extra data points last week, they are mostly unchanged save for a slight contraction in a couple of the error bars. 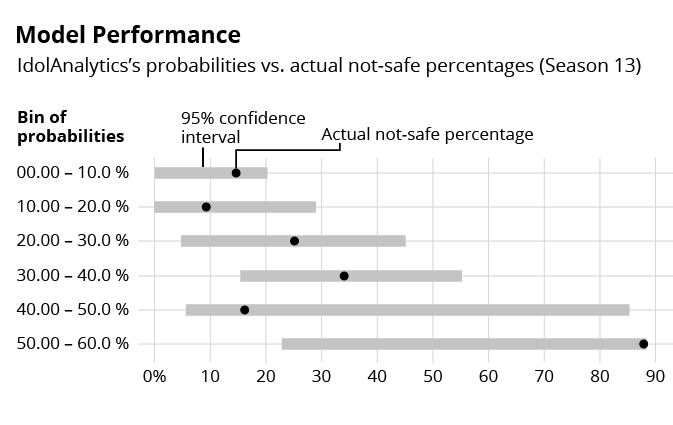