Handicapping the Top 2 is a fool’s errand

This is an extremely contentious season, with no clear favorite to win. Let’s dive into some historical data to see if we can calibrate our expectations. 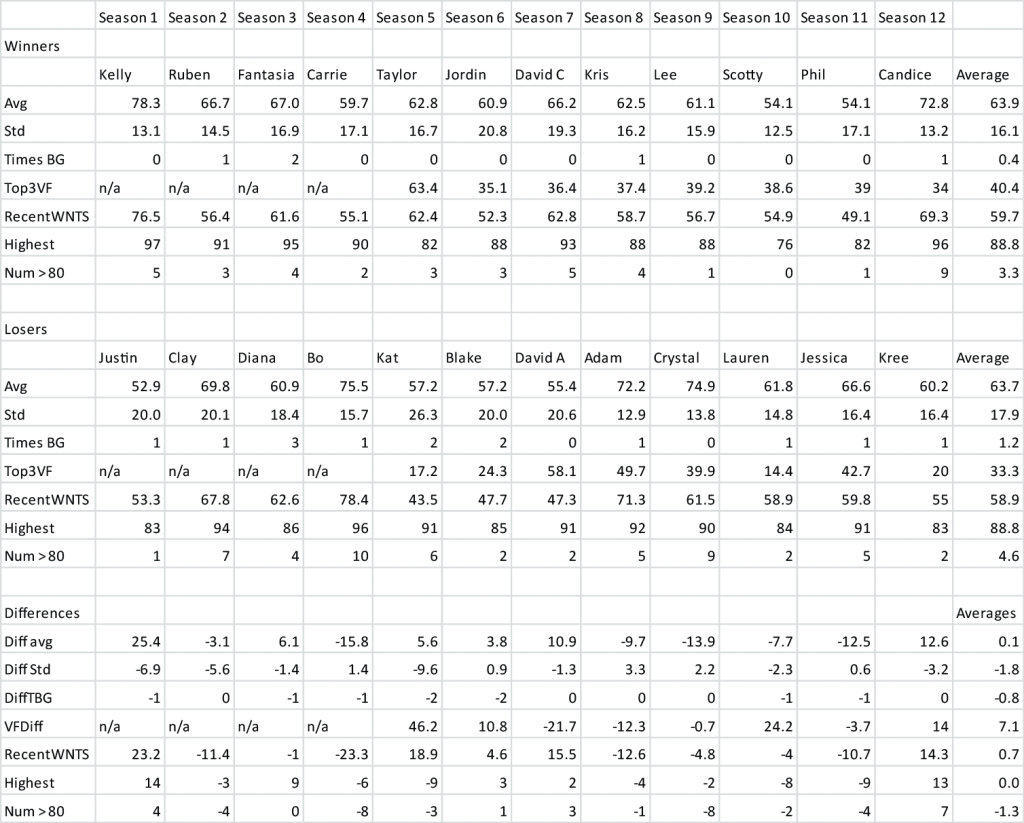 The first thing we could look at, which is most obvious, is season-wide approval rating. However, we find no association between this and winning the finale. The overall difference between the winner and the runner up has the winner up just 0.13 points, not statistically significant. Kelly Clarkson, David Cook, and Candice Glover all had much higher averages than their opponents, but Bo Bice also had a huge lead on Carrie Underwood, Adam Lambert was comfortably higher than Kris Allen, and Lauren Alaina soundly beat Scotty McCreery by this measure. If we look at recent scores (from the Top 6 to the Top 3), again there is no real discernible difference.

Second is we could look at how up-and-down the contestant is. Someone with a lot of low scores and a lot of high scores could be more likeable than one who had consistent good, but not amazing scores. Here we find that the winners are more consistent than the runners up, by about 2 percentage points, measured as the standard deviation of all scores.

In Votefair, the winner is on average 7.1 points more popular than the runner up. However, it’s had the winner leading only half of the time! Votefair predicted a double-digit win for David Archuleta and Adam Lambert, neither of which came to pass.

What about the number of great moments the person has had? We can tally the number of performances with WNTS greater than, say 80. What we find is that the winner actually has 1.25 fewer hits than the runner up, not what we would expect. These numbers are small enough that this may just be noise, since 79s don’t get counted even though they are very close.

Nothing can be judged from gender either. In male-female pair-ups for the final, men have beaten women 4 times, and women have beaten men 3 times (4  years had mono-gendered finales). I would note, though, that a woman hasn’t beaten a man in a finale since Season 6.

At this point we have to take a step back and ask ourselves whether there is any real season-wide indicator that we trust on who will win. I don’t think there is.

As to the variables that are week-to-week, by far the most predictive has been Dialidol. Due to the rule changes that make Dialidol mainly irrelevant (possibly misleading), it’s very difficult to say what to think about who is going to win.

My feeling (for what it matters) is that this is going to be as close a call as it gets. I might be inclined to say the finale to Season 13 is a coin flip. And anyone (including Bing) who says they know who the winner is going to be is blowing smoke.