The tweet of the moment comes courtesy of Dan Meyers: 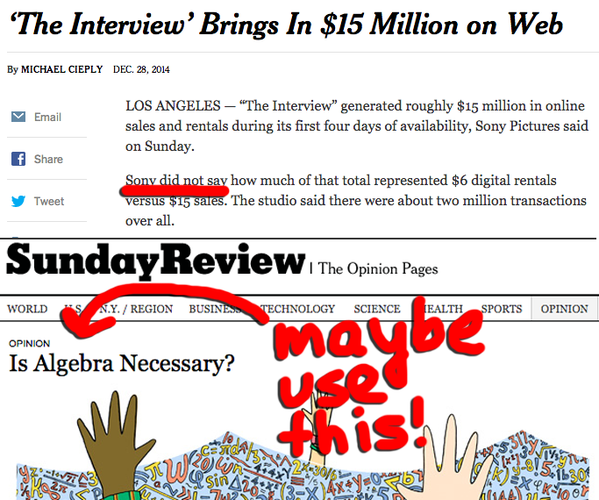 If The Interview generated $15M in online sales, rentals were $6  and sales were $15, and there were 2M transactions, then it ought to be pretty straightforward to say how many were rentals and how many were sales:

I guess the lesson here is that it isn’t just that the person at the paper of record couldn’t solve this problem, but that he actually didn’t think there was enough information to determine the answer. He presumably could have just asked a peer to solve these equations for him. (Note also that people in my Twitter mentions were arguing about whether it’s solvable. Um. It is.)

Michael Cieply is likely considered a smart person. Hell, he probably is a smart person. But quantitative reasoning is not a prerequisite for being considered smart. And with the publication he works for actually publishing an editorial asking whether algebra is necessary, it’s maybe not so surprising.