Home » Musicology » Are we stuck listening to Blurred Lines forever?

Are we stuck listening to Blurred Lines forever?

The song Blurred Lines by Robin Thicke was the number one song of 2013, as rated by Billboard Magazine. In 2014, the song of the year was Happy by Pharrell. Now, one of these songs, Happy, I could stand to listen to, and I fully expect to at every wedding I attend for the next 10 years. But Blurred Lines, I could do without that.

Now, by the same token Hold On by Wilson Phillips was the number one song of 1990, and I honestly rarely if ever hear that on the radio, out at shops, or at weddings. So there’s some hope that not every song-of-the-year earworm is going to be jammed down our throats in perpetuity. Let’s mine some radio data to see what we can see about this.

Just as I’ve done elsewhere on this site, the data is from a number of different radio stations. A couple are Top 40 stations, a couple are adult contemporary and hot AC. There are some classic rock stations, oldies, easy listening, and urban radio (rap and hip hop), and one country station. I mined every station’s playlist data from Jan. 23, 2013 through Dec. 17, 2014, so roughly two years, and cataloged the songs that were played. (In most cases, 99.5% of the song plays were identified successfully. The ones discarded represent songs played very few times, often just once, or mislabeling of other songs.)

The good news is that plenty of songs that rank in the Top 10 see little to no radio play. In order to visualize the data, we need to choose a way of plotting chart success versus number of times the song was played, and I’m afraid there’s no single way to do this. The way I chose to do it is to calculate a score the way Whitburn has established, which is the number of weeks the song charted in the Hot 100 (times 101), minus the sum of the rankings. So if a song charts at position 100 (the worst position on the Hot 100) for only 1 week, it gets a score of 1, the lowest possible score other than 0, representing a song that never charted at all on the Hot 100 at all. We can then plot the scores versus the number of song plays on the radio (we restrict this to songs from before 2010, to avoid the effect of recency which greatly inflates the radio play, and clearly diminishes with time) 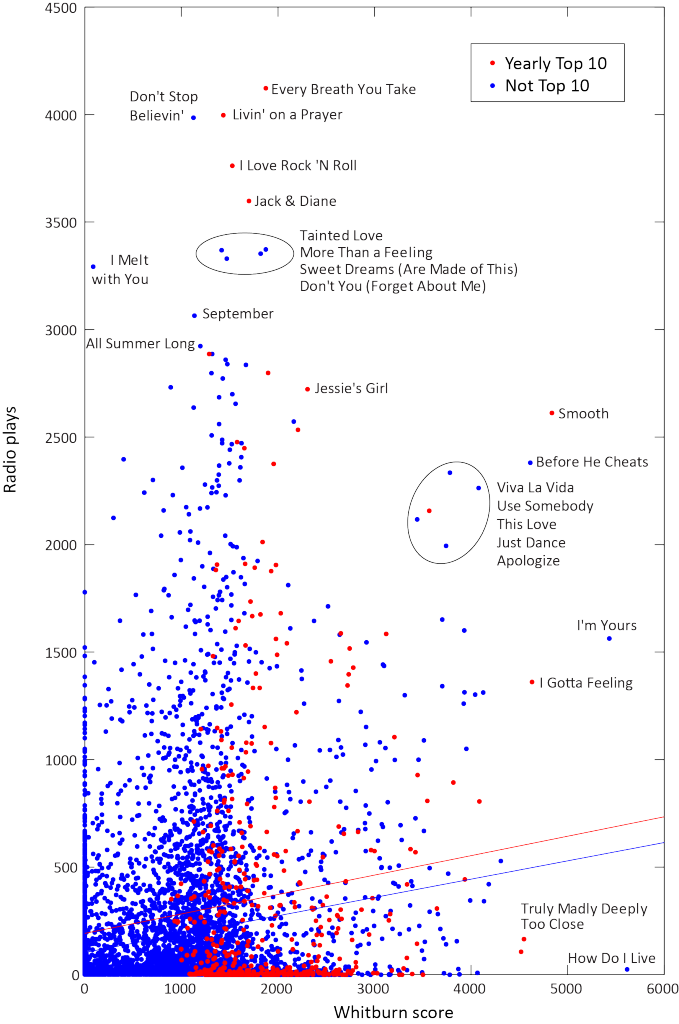 Red dots represent songs that are ranked in the Top 10 of their years, whereas blue is any rank below 10. The two regression lines show that the number of airplays of a Top 10 song. While being in the Top 10 for the  year is a factor in radio play years later, it is far from the only variable that determines it.

Happily, many Top 10s from 1965 to 2009 are virtually never played. Songs like Love Will Keep Us Together, Physical, and Like a Virgin are barely if at all prevalent on radio stations. You probably haven’t heard Tie a Yellow Ribbon Round the Ole Oak Tree lately, nor have you heard Ebony and Ivory, Alone Again (Naturally), Seasons in the Sun, or I Swear. All of these were at or near the top rank for their year, but all of them have basically fallen out of popular culture. In 2000 Savage Garden’s I Knew I Loved You charted for 17 weeks in the Top 10, but it essentially never gets played on the radio. When was the last time you heard Chicago’s Look Away? It’s probably been awhile. Coolio’s Gangsta’s Paradise and Dolly Parton’s 9 to 5 may have been smash hits in their time, but they don’t see the light of day in 2015.

On the flip side, there are quite a few songs that had little or no chart success that are played a lot on the radio. I Melt with You by Modern English barely cracked the Top 100, but it’s played every day on several stations. Journey’s Lights peaked at number 73 on the Hot 100, but it also is played constantly. 90s hits What I Got by Sublime, Killing Me Softly by the Fugees, and Don’t Speak by No Doubt all failed for one reason or another to get into the Hot 100. These are joined by Basket Case (Green Day), 3 A.M. (Matchbox 20), Good Riddance (Green Day), and Today (Smashing Pumpkins), songs which are heard all the time on the radio.

All that being said, there is perhaps cause for worry: 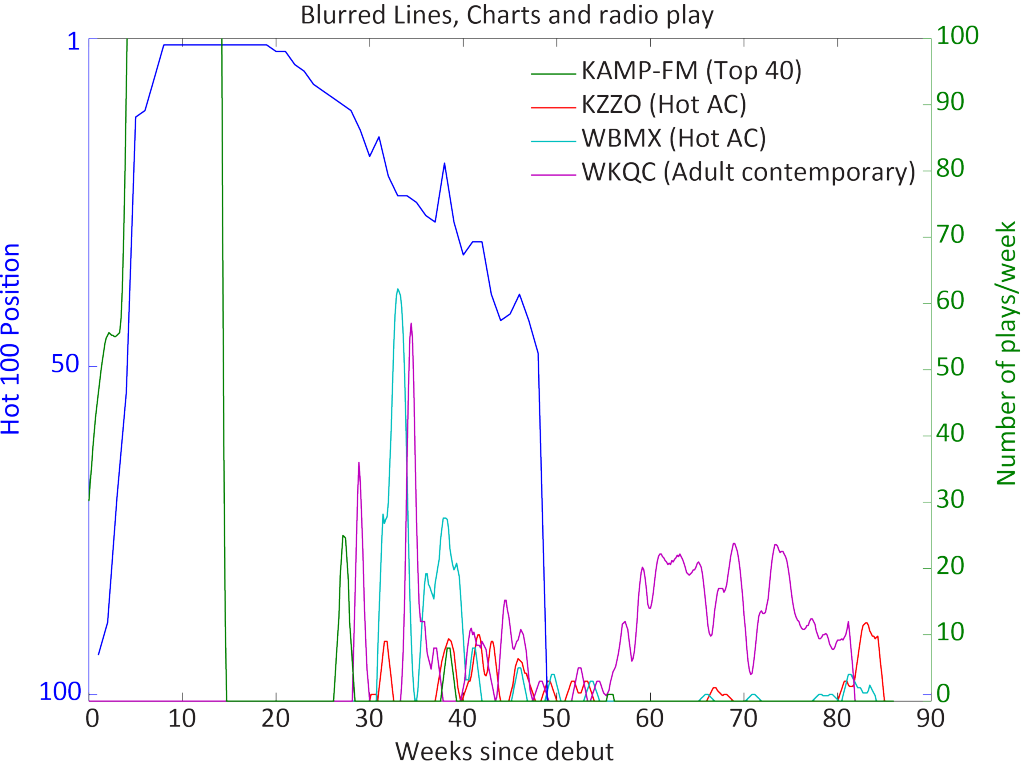 This chart shows the number of radio plays versus time along with the chart success of Blurred Lines. In blue we see the chart success, and all the other curve are its radio play on 4 different stations. The Top 40 station (green) stops playing the tune even before it falls off the charts, but adult contemporary stations have been playing the song since then. The only reason it stops at week 82 is that many of those stations begin playing nothing but Christmas music at that time. If the Hot Adult Contemporary stations were playing it, that’d be one thing, but if it’s made it onto mainsteam AC, we could have a problem.