What Twitter thinks: the first 11 reveals of the Top 24 (no spoilers) 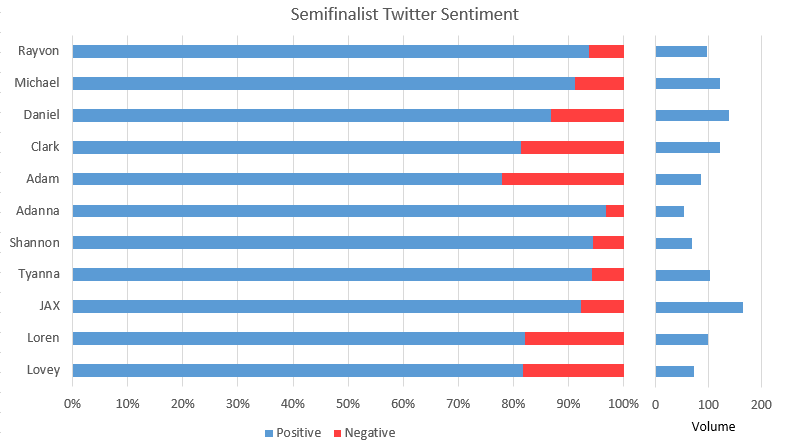 Adam Ezegelian is by far the most controversial pick, with only a 57% overall sentiment and a high number of negative opinions (roughly 25% of tweets were negative). The frizzy hair, schlub-cum-rocker sang “Here I Go Again”, and it was not overwhelmingly popular:

Adam? Seriously? Remember that rocker who won last year? Where is he? #idol @JLo @HarryConnickJR @KeithUrban

But clearly not everyone thought so

Clark Beckham, who I thought was pretty good, seemed to be unpopular by the numbers, with 60% overall sentiment and about 19% negative tweets:

I feel like Clark is trying to be Phillip Phillips 2.0. but it doesn’t really work #idol — Stacey (@youreahater) February 14, 2015

However, I think sentiment-determining algorithm was tricked a little, by tweets like this:

I wouldn’t worry about Clark at this point.

On the girl’s side, Lovey James was not a hit at all:

Lovey is doing too much to the wrong song. #Idol — Stevie not Steebie  (@StevieSoFetch_) February 19, 2015

At 60% overall sentiment, and almost 20% negative tweets, I’m not sure the judges made the right pick. Adanna Daru was much more popular, but still seems to suffer from a low number of people talking about her.