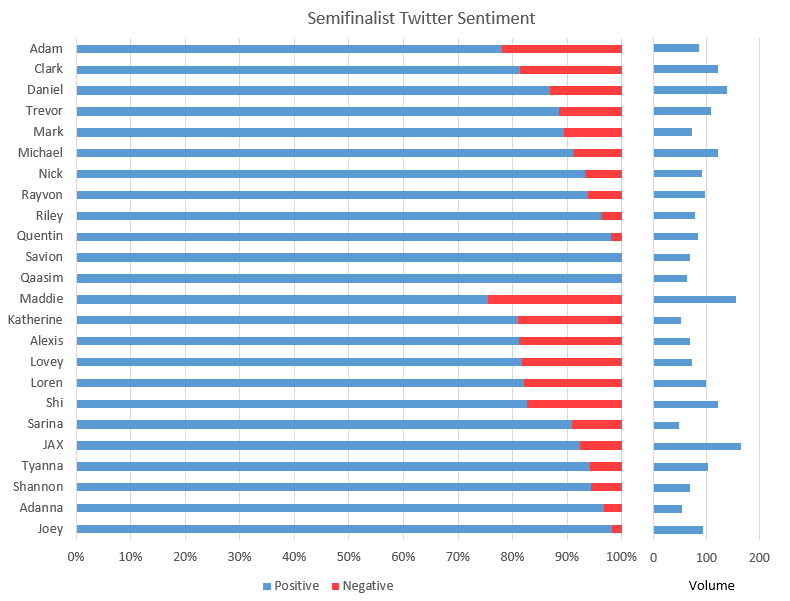 The Top 24 has been revealed, and there are a couple picks people are none too happy about.

On the girls’ side, Maddie Walker won a sing-off to take a position, and Twitter was a bit miffed. “I have NEVER been more disappointed in an #Idol decision tha with Maddie & Rachel”, said one user, with another adding “so basically if your pretty you can win over someone who’s a better singer  #Maddie shouldn’t have won”.

Katharine Winston also had a fair number of negatives, with one opining “ick god Katherine screeching her way through this song. please cut her”. However, not many people were tweeting about her this week, and so a lot of her score comes from tweets before seeing this week’s performance. I would withhold judgement about Katharine for now. The same is true of Alexis Gomez, whose Spanish language version of a country song didn’t create a lot of buzz.

Lovey James garnered quite a few negatives this week, with one commentator stating “It’s bad enough that her name is Lovey but I don’t think I can listen to her nasally voice week after week.” Loren Lott also had a fair number of complaints like “I’m sorry but Loren Lott’s voice is like nails on a chalkboard”.

No two women were talked about as much as Jax and Shi, and Shi had a few detractors, though not as many as some of the others. “omg shi is terrible. she’s gorgeous but terrible.” said one, with another saying that it was a “Travesty that Jelly wasn’t chosen over Shi.”

Jax fared much better, which is notable because it seems like the more people are tweeting about you, the more haters you have. I saw nearly nobody complaining about her.

Now we turn to the men, where Adam Ezegelian held on to his top spot as the one getting the most negative tweets. “Adam is singing horribly. I hope no one is watching @AmericanIdol tonight. What an embarrassment.” said one watcher. I would note, though, that some of these negatives may be due to people bitching about a different Adam, Adam Lasher, not making it through. Time will tell.

Though he got a fair amount of comments like “Finish puberty then come back.”, I’m appalled that Daniel Seavey is only third-least popular. He generated a lot of buzz, as did Michael Simeon, who was somewhat more popular.

At this point, we’ve only seen short clips of the contestants, and I don’t much think at this point I would be too keen on drawing conclusions. Maddie clearly has cause to worry, and I’d figure that Adam probably does as well. As for the others, I think people really need to see a whole performance before we can say much of anything.