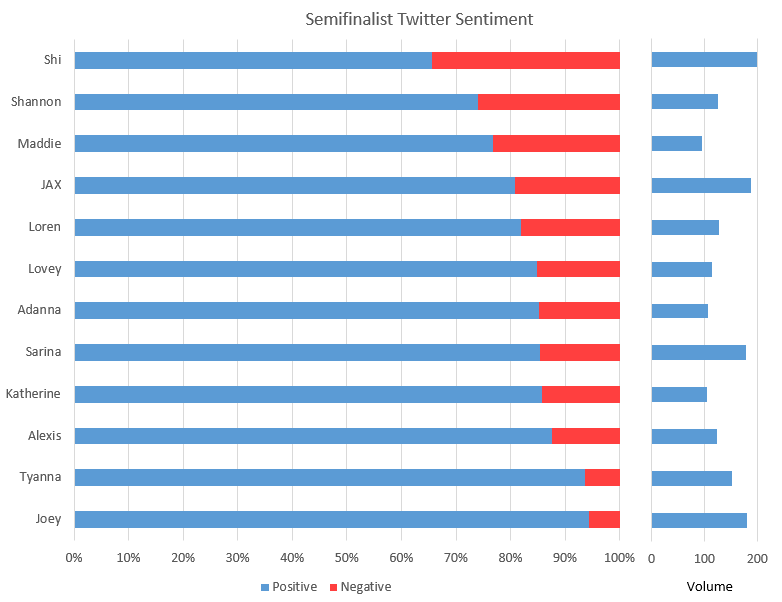 People tore themselves away from tweeting about what color that dress is (it’s white and gold, you weirdos) to weigh in on the Top 12 women, and man: people hate Shi. “song choice was terrible. I kno she is much better than that”, “shi can’t sing for shit”, “Shi really shouldn’t have been put through and she’s bombing so bad on this song” were typical comments. Shi had the lowest Twitter sentiment I’ve seen all year.

People also did not like Shannon (the young girl who sang the Pink song). “And now Shannon. The Kristen Stewart of #idol #atonal #awful #affected”. “I’m a Shannon fan, but that was a weak performance. #idol :
Shannon lacks stage presence. #SeeYa #AmericanIdol #Idol”, “Shannon… fell flat. Shouty, pitchy, breath issues, wobbly notes. Thats all. Grade: D”. Not going to disagree with them.

Maddie Walker still had a lot of negative sentiment from last week, when she was chosen over another contestant after a sing-off. Some examples: “still mad about the rachel/maddie thing? so i hope she goes home”, “Maddie looks like a child from Toddlers & Tiaras.”, “Maddie with [deer] in the headlights eyes. School pageant performance.”

Everyone else was above 80%. People had a lot of love for Joey Cook, who sang a Keith Urban song with a quirky accordion arrangement. “Love Joey’s entire shtick & personna.”, “Well Joey Cook definitely gets the most creativity points.”, “I like Joey Cook. Wish I could say the same about that performance.”

Tyanna also got a lot of positives. “Tyanna Jones was absolutely amazing tonight “, “Tyanna Jones has the vocals from heaven, but her movements are jerky and stiff. She needs to feel the music, and move with more sass.” “Tyanna gone gone take it all this year they matter as well give her the loot and the deal now”. Ok then.

I should have a quantitative forecast sometime tomorrow. By all accounts, the results won’t be announced until next week, so be patient.