In the methodology post, I mentioned that contestant Order was an important variable. In fact, it you correct for the other variables, you are significantly better off being near the end of the show versus the beginning of the show: 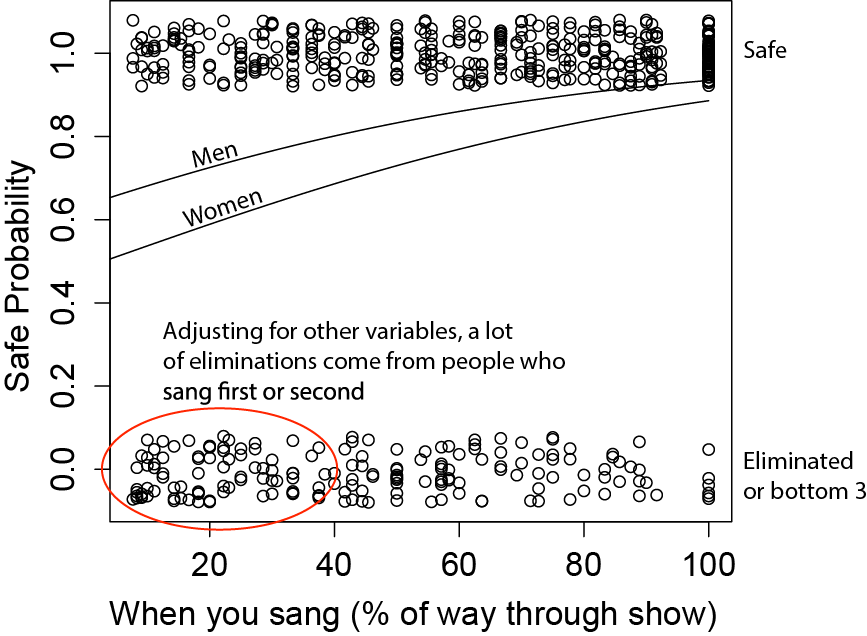 Points at the bottom are people who were not “safe” (either eliminated, bottom 3, or saved) in Final rounds with no-multiple performances. Points at the top are people who were Safe. The two curves are the probability of an average contestant (both male and female) being safe. All other things being equal, a man goes from a 65% chance singing first to a 95% chance of being safe at the end of the show. A woman goes from a 50% chance to about 85% if she is in the pimp spot.

I’ve idly speculated about why this was in the past. It could be that the producers put the better contestants at the end of the show for ratings purposes, and it could be that most people vote at the end and only remember the recent singers. Most likely it’s a combination of both of these things. The forecast model from previous years didn’t include this explicitly as a variable because it was no better than Dialidol at accounting for singing order. But now that Dialidol is kaput, it’s worth to consider explicitly.