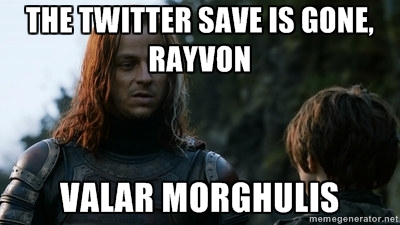 Unlike last week, there’s plenty of granularity here. Rayvon is least likely to be safe. Not outside the margin-of-error, though.

So look: I know that some people don’t like ignoring Votefair. It seems like, if that many people are voting for one person, how can you ignore it? But numbers don’t lie. Even in the old model, the one that had Dialidol, Votefair was bottomed out at 20% strength at this point in the contest. And now, without that history to calibrate by, we have no idea how it affects the outcome, but we know it’s probably very little. As far as the data for rounds with multiple performances, there is no statistically significant effect of Votefair. If it does matter, it’s impossible to say by how much. So, just like last week, take the above numbers for what they’re worth, derived from considering solely how many times a contestant was in the bottom group and the highest WNTS rating of the week.

While Clark clearly has his fans, people on Twitter are a bit more negative on him than the others. The same is true of Tyanna. 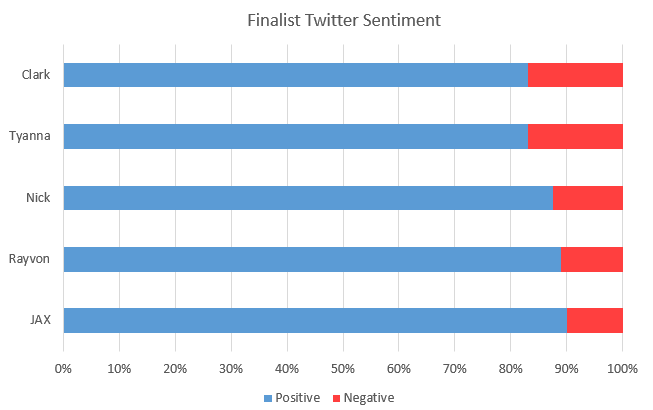 Rayvon, still going strong, has the second-highest number of positives. Note that I believe this week was the last week with the Twitter save. Valar morghulis.

In case anybody was wondering, Dialidol is still hilariously wrong. 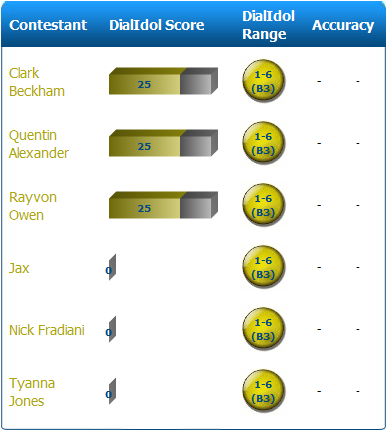 I no longer know how many people are singing or what the hell is going on.

To be quite honest, my interest in this season is flagging. Couple this with the inherent difficulty in modeling Idol in a post-DialIdol age and, well, the forecast has a ton of uncertainty. Continue reading

Final update: Joey sticks at down 7 points from last week, but she’s still 4th most popular. Nevertheless, she falls out of safe territory. Nick falls a little, and overtakes Rayvon as the least safe (but not by much).

Update: new numbers. Also, the fit in the Top 7 is somewhat better using data the Top 10 to the Top 6. In that case, gender becomes less significant, as does performance order. Jax rises one slot, as does Quentin, whose numbers were lagging a bit. Joey’s popularity is still down 7 points from last week, and Tyanna’s 6 points up.

First of all, nobody is even close to being called in the bottom 2 outside the margin of error. The model is not projecting Jax is in the bottom 2. Nope.

Historically speaking, Jax is not in good territory. First, she is a woman, and AI voters just don’t seem to like those. Her performance of Poker Face was not particularly well received (I thought it was marginally better than the rest of the internet did). And while she’s fairly popular on Votefair, she isn’t overwhelmingly so. She trails Joey, for instance.

What tips the scales somewhat against Jax is that she went first, which ain’t the best place to be. Now, you could argue, and it’s not necessarily wrong, that performance order isn’t as important now that you can vote right away on your smart phone. Ok, sure. But, I know that I wait til the end of the show, and that means other people might too. And they might forget to vote for Jax. (Full Disclosure: Since the Top 12, I have only voted for Joey.)

Twitter isn’t overwhelmingly positive on Jax either, to be honest: 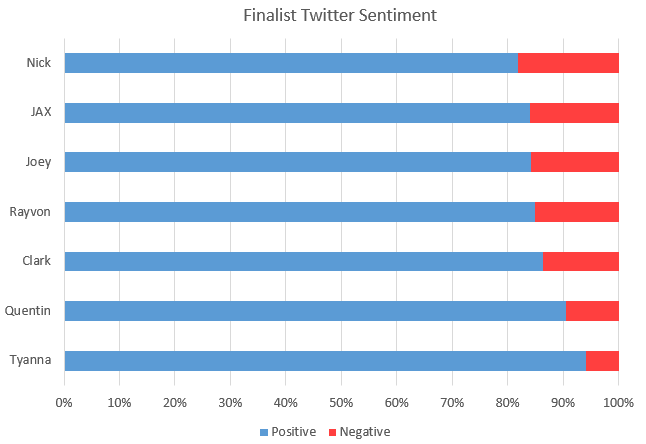 Nick has more negatives than Jax. But Jax has almost as many as the controversial Joey Cook.

In any case,  nearly equally likely to be in the bottom 2 (yet again) is Rayvon. He’s got a great Twitter organization pulling for him, and both weeks they have made #SaveRayvon a trending hashtag. That’s something of a pickle for the Idol producers: what if the Idol save pits Rayvon as a weekly gladiator against another contestant, and like Maximus he consistently comes out ahead? Now that would be entertaining.

Things aren’t great for Quentin, although he is still better than fair to be safe. Clark, Tyannaare all projected safe for now.