Tonight the idol kids will be singing songs from the Billboard Hot 100, apparently of all time (if you’re curious, go check out the IdolDB). So, yeah. Let’s see how it goes. Continue reading

Updated with official numbers. Jax’s current popularity numbers are down from last week, but Votefair is still gathering data. Right now 60% of the popularity is the new week’s numbers, 40% last week’s. This reduces the noise in the forecast without really sacrificing anything, since the numbers are 100% new numbers by the day of the show. Joey’s numbers are up a 9 points from last week, which is a bit more volatile than normal.

Qaasim appears to be in trouble, but I reserve the right to rewrite this wrap-up after official numbers come in from WNTS.

With that qualification out of the way, it’s highly believable to me that Qaasim could be eliminated. He was saved, and surviving only 2 rounds since a save would be low for a saved contestant. However, in a night of pretty good performances, his stood out as being pretty bad. The only advantage Qaasim has is that he sang near the end of the show.

If it comes down to Twitter again, my data would seem to suggest that Qaasim would be in trouble: 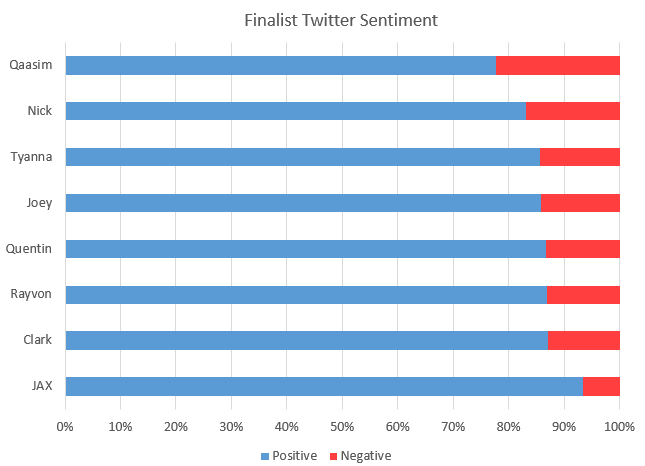 He has the highest number of negatives by about 6 percentage points, followed by Nick and Tyanna. Joey recovers significantly from last week. Jax is in the top spot, followed by Clark.

Third most popular on Twitter sentiment was Rayvon, and maybe that shouldn’t be a surprise. Although I think Rayvon was probably not the lowest vote-getter, his fate was left up to Twitter. Looking at the Twitter trends:

#SaveRayvon trended, while #SaveDaniel did not. I have no way of determining which hashtag got the highest volume of tweets, as that is not a search feature of the Twitter API.

I don’t think there’re any surprises here except for Joey Cook. Why did Joey’s popularity numbers crash so badly when she sang one bad song, only to rebound the next week? It’s not at all clear to me. But I suspect that next week Joey will rise back to fairly high percentage, and that this is an artifact.

Right now, the Top 3 Tracker does take into account how well the contestant did in previous rounds, but it mostly is looking at the current round (which means Joey’s performance of Girls Just Want to Have Fun). The model views her quite suspiciously because of that, and thus rates Nick and Quentin as being more likely. I’m not so sure myself.

Eight people will perform! 9 of them, presumably, will have come prepared to perform! This is kind of crappy. But this is how they’re doing it this year, so, ¯\_(ツ)_/¯ Continue reading

Final Update: Daniel rises out of “sure” territory. FFS, who is voting for this person?

Update: Joey’s popularity has cratered at Votefair. Current forecast will converge to this week’s current numbers soon, but her fans are abandoning her over there. She falls to third likeliest.

Green = projected safe, Red = projected bottom 3, yellow = too close to call. Probabilities assume a bottom 3. See the methodology post for info on how this works. That post contains all the data and the code.

The last time Daniel Seavey was projected in the bottom 3 (outside the margin of error) was in the Top 12, and he was almost in a dead heat with Sarina-Joi. The model was only barely comfortable projecting him in the bottom 3, and I’m almost sure that he was, although the producers did not release that information. To say that Daniel is likely to go is a bit of an understatement. His raw safe percentage (before normalization is applied) is 31 percentage points below the cutoff at present. Now, the popularity numbers, as I’ve done in previous weeks, are frozen in their numbers from last week (so that Votefair has time to re-poll people), and thus that might change. Daniel would have to jump from his present percentage of the plurality vote, 2%, to 7%, which would be more popular than Tyanna presently is. I do not see that happening. Now, of course, that’s not to say that Daniel is definitely going home. But he sang in the first slot, his WNTS scores have been abysmal, and his popularity is now the lowest. With fewer women to serve as cannon fodder, Daniel is not going to have an easy time of it. Worsters better get to it if they want to save him. I can’t say that I’m too mad at the model’s performance so far. This week had a bottom 3 of Rayvon, Maddie, and Adanna, which were 3 of the 4 lowest rated in the model’s view. (Daniel was the 4th, of course.) No single indicator would have predicted Adanna’s elimination, which is why I bothered with the model in the first place. She had the 4th highest WNTS rating and was tied with Rayvon and Qaasim in popularity. But she sang first, she’s female, and she was a wild card pick. Bing bang boom. For several weeks there have been a number of people in super-safe territory (> 98%), which is on account of there having been 11 or more contestants and only 3 bottom-3 slots. Now with 9 people, the odds of being that safe are considerably reduced. Clark stays well into that territory, but nobody else does. Joey has fallen significantly, in 6th place and not called safe within the margin of error. At 4th most likely, her fans would be justified being a bit nervous. To wit, see Twitter’s response to the Top 9: 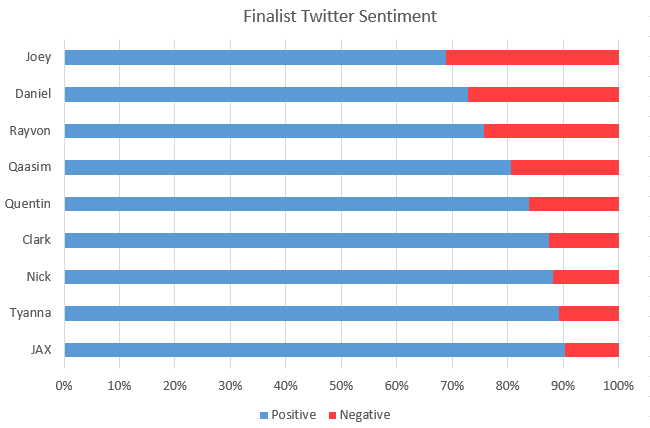 Joey leaps into last place on positive sentiment, as Daniel somehow recovers to above 70%. I have no historical basis to say what that means as far as her chance of being safe, but I present it anyway for your consideration.